You can find an LGBT Pride celebration during just about every month of the calendar year, but June is clearly the biggest, with major pride celebrations in Los Angeles, New York, and San Francisco.  It seems like we are always waiting for some news about LGBT rights as the month of June rolls around and June 2013 is no exception.  The United States Supreme Court is prepared to share its decision about the Federal Defense of Marriage Act and California’s Proposition 8.  A decision about both cases will likely come just after Los Angeles celebrates pride, but before the parades begin in New York and San Francisco.  Which ever way these decisions go, we will ready to protest or celebrate as our fight for equality continues.

I hear some LGBT people talk at times about how they are tired of pride celebrations or that somehow they aren’t “gay enough” anymore.  I’ve heard similar comments about how pride has become commercialized.  This is good time to remind those cynics out there about the worsening conditions in countries like Russia, The Ukraine, Uganda, and Nigeria, where people are being arrested and jailed for simply flying a rainbow flag.  Laws are pending in some of these countries that will criminalize advocating for LGBT rights.  Even a simple pride celebration will land participants in jail in some of these countries.  So while LGBT equality seems to be moving rapidly in one direction in some States and other countries, it is moving backwards in others at the same speed.  Celebrating who we are is essential to reminding the world that not everyone is born straight.  It is critical that we make ourselves visible and to demonstrate we are a sizable minority population and not a small exception to the rule.  And let’s not be frustrated or feel imposed upon when straight people come out to celebrate pride with us.  We need every ally who is willing to stand with is and I couldn’t be more happy to see more and more straight people celebrating gay pride with us.

This year I’m excited to be celebrating pride as some different events around the country.  I’m starting this week in Washington D.C. by speaking to an incredible group of LGBT federal law enforcement personnel at the FBI’s Hoover building.  I think it’s going to be surreal to be standing in this historic building with a group of “out” FBI agents when just 60 years ago this year, FBI personnel working in this same building were activity seeking out homosexuals working in federal jobs to fire them pursuant to an order signed by the President of the United States.  A sharp contrast to President Obama’s proclamation last week designating June as “Lesbian, Gay, Bisexual, and Transgender Pride Month.”

Near the end of June, I plan to visit the Stonewall Inn in New York and have a cocktail or two at one of the places where it all began.  I’m looking forward to thinking about that night 44 years ago when our community stood up and made ourselves visible while fighting back against the oppression of the day.  And of course I will be marching with the San Francisco Police Department on June 30 at San Francisco Pride as I try to do every year now. And why do I march every year?  It’s for all of the LGBT people who experienced brutality by the police decades ago and for all of the young LGBT people out there who are wondering if they can be themselves and have a career in law enforcement.  It’s for all of the straight people out there who don’t believe LGBT people work in law enforcement and for all of those still closeted LGBT officers who are looking for the courage to come out.

I am celebrating LGBT Pride this month especially for all of those LGBT people around the world who cannot.  I encourage you to get out there and take advantage of the opportunity to celebrate who you are by making yourself visible.  And no matter what the United State Supreme Court decides, our fight for full equality and acceptance continues.  There are many unresolved issues still out there and your neighbors and mine need to know we are here part of a greater community deserving of full equality.  Find an event near you, grab your rainbow attire, and get out there to show your pride!

What would an LGBT Pride celebration be without music?  This is newer some that is destined to become an anthem at this year’s pride celebrations.  Listen carefully to the words.

I would be remiss if I didn’t acknowledge the 35th anniversary of the rainbow flag.  Gilbert Baker created this icon in 1978 at the request of Harvey Milk and others.  Since that time, the rainbow flag has become an international symbol of LGBT freedom, equality, and community.  Take this opportunity to learn more about the creation of this flag and its meaning. 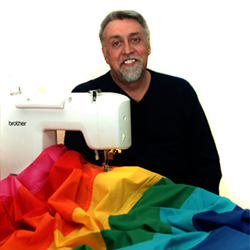