About American Heroes Coming Out From Behind The Badge 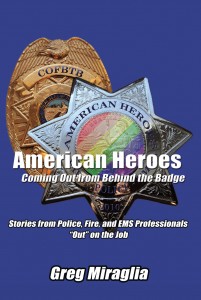 American Heroes Coming Out From Behind The Badge is Greg Miraglia’s second book intended to show examples of how police officers, firefighters, and EMS professionals have been able to come out and be successful on the job.  The stories come from across the country and tell of a very personal and courageous journey.  They are intended to both inspire and educate.  The book contains a section on how to come out as well as a section with resources and associations supporting LGBT public safety professionals.

Imagine working in a job you always dreamed of having and working in a career that excites and fulfills you in every way.  Consider what it would be like to be highly successful in your work, admired by your peers, but always fearful that if anyone you work with discovered your secret, it could all be over.  This is what it is like to be a closeted gay, lesbian, bisexual, or transgender member of law enforcement.  And in the fire service and emergency medical services profession, the condition is even worse because of the common housing situation required while working a 24 to 48 hour shift.

It’s true that society as a whole has become more accepting of gay and lesbian people, but homophobia continues to be pervasive in much of the public safety arena.  Most states still do not have any employment protection against harassment and discrimination based on sexual orientation.  Imagine being fired from the job you love because of who you are.

This book is ideal for anyone who is struggling to come out as well as for straight allies who want to learn more about how to support their LGBT colleagues.xx Listen to a radio show interview with Greg Miraglia and three of the contributing writers.

From Inside the book:

In 1978, being gay and out in law enforcement was unheard of except in larger police departments like San Francisco.  In fact, it was just a few years before that the American Psychological Association removed homosexuality from its list of mental illnesses.  There was no employment protection based on sexual orientation and police departments were still asking about homosexual experiences as part of the standard background investigation conducted for every law enforcement applicant.  While it had been 9 years since the Stonewall riots and the birth of the gay rights movement, in California, that movement was really just coming alive.  Harvey Milk was elected to the San Francisco Board of Supervisors as the first openly gay public official in the Country.  The Castro neighborhood in San Francisco was emerging as the focal point on the west coast for the gay rights movement.

I started my career at medium sized police department at the age of 14 as a police explorer scout.  Within the first hour of being in the police department, I knew I could not be “out” and have a successful law enforcement career.  I knew I was gay, but made a decision to hide in order to pursue a law enforcement career.  I spent the next twenty-five years leading two separate lives.   I literally hid behind my badge thinking somehow that no one would ever suspect a guy who was good at playing the part of a straight man and who was enjoying a very successful career.  I never dated women, but always showed up with an attractive woman on my arm at the department social events.  On my days off, I would hook-up with guys for one-night stands, but would never disclose my real identity or profession.  I burred myself in my work to avoid the inevitable loneliness that comes with being in the closet.

Finally, in 2004, I mustered the courage to come out from behind my badge and to begin living my life in the truth.  In 2006, I married the love of my life, Tony.  I’m still enjoying a very successful career administering and teaching at a law enforcement academy at Napa Valley College in California.  As I looked back, I realized that I remained in the closet out of fear for way too long. The pain, fear, and loneliness I experienced was for not.  While I’m confident I would not be where I am today had I come out in 1978, I can say with some certainty that times have changed.  There are many highly successful gay police officers, male and female, working across the country at all levels of large and small police and sheriffs departments.  There are also way too many gay and lesbian police officers who remain hidden in the closet.

I wrote the first book, “Coming Out From Behind The Badge,” because when I came out there were no books about being gay and “out” in law enforcement.  The only ones I found were about ten years old and contained many stories of devastation and career-ending failure after coming out.  I knew that my experience in 2004 was different than those told in the books published in 1994.  Society had changed and I knew there had to be other success stories out there that needed to be told.  My partner Tony was the person who really inspired me to write.  He encouraged me to share my truth and my experience with the hope of inspiring others to come out from behind the badge.  The first book was published in late 2007 and from the day it was released, I began searching for more stories to share for this book.

I’m often asked about how I collected the stories and who wrote them.  I solicited contributions on a website that I created while researching the first book.  I sent out invitations to every LGBT law enforcement organization I could find.  All of the stories I received were written by the contributors based on the idea of the book I pitched on the website.  While the stories were different, they all came from people who sincerely wanted to make a difference in the lives of other LGBT officers.  Like the first edition, this book contains stories written by the officers themselves from around the country.  In addition to more stories from law enforcement officers, I’ve included contributions from a firefighter and a transgender EMS professional.

It is my hope that these stories will also be read by our straight allies and those who have yet to understand what it is like to be gay in law enforcement.  Clearly there is no way to fully understand how much courage it takes to come out in law enforcement unless you have faced having to do it, but I hope these stories give some sense of what these individuals experienced.  I hope at least that they will help you understand and to better empathize with someone you work with who may be hiding behind their badge.  It makes little difference whether you work in law enforcement, the fire service, or as an EMS professional; we all depend on each other. Your gay and lesbian colleagues want the same thing you do. We all want the benefits of camaraderie and the great feeling that comes from being able to depend on someone as well as to be depended upon.  We want to know those we work with and to know their truth.  Being closeted compromises all of this from happening.  In the worst of cases, it has caused officers to take their own lives.

The contributing authors in this book include: