The Story Of Coming Out From Behind The Badge

After working in law enforcement for about 25 years while “in the closet” I was inspired in 2004 to “come out.”  During that process, I searched for books with positive examples of LGBT law enforcement officers who were out and successful on the job, but found none.  I met my now husband shortly thereafter and he encouraged me to share my story with others as a positive example of what is possible in today’s world and Coming Out From Behind The Badge was born.

While writing the first book in 2005, I learned of a 24 year old officer was found dead in his apartment after taking his own life.  Responding officers found no note and no obvious reason for his decision to commit suicide.  He was a highly successful officer who loved law enforcement.  His apartment was full of pictures of him in uniform, working with his friends, and of other fellow officers.  He had no sign of a girlfriend and among all of the pictures, there were none with any women.  His fellow officers were stunned.  His friends talked about knowing this officer, but only about small pieces of his life.  Those who were closest to him said they never saw him with a girl and some speculated that he might be gay.  The officers investigating this young officer’s death suspected the same.  Why did he take his own life?  No one will ever know for sure, but how incredibly sad it would be if this highly successful officer who was so loved by his co-workers decided that he couldn’t be who he was out of fear of being rejected by those he loved and cared for so much.  How sad it would be if he felt so trapped by being gay and a cop that he didn’t see the possibility of being both at the same time.  My friends, that is what this book is all about.  He is the officer who my books intended to help and to save. 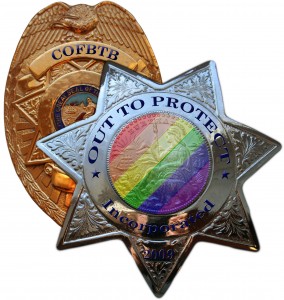 The two badges that make up the logo appearing on all three books are mine that I wore while working as a peace officer for two different departments.  The 7-point star was the first badge I wore.  The rainbow colored center represents what was always in my heart.  The gold shield behind the star is the badge I wore in 2004 and represents my coming out.  Together these badges represent the two typical badge styles used in law enforcement; the 7-point star signifying seven-day-a-week service and the shield symbolizing protection.

Part of my original vision for Coming Out From Behind The Badge was to use proceeds earned from the books to provide scholarships for “out” LGBT law enforcement students as a way to support role models and leaders from the LGBT community pursuing a career in law enforcement.  In 2009, I formed Out To Protect Incorporated as a non-profit organization.  We now provide scholarships twice a year and offer grants to law enforcement for LGBT awareness training throughout the year.  Coming Out From Behind The Badge is now an educational initiative of Out To Protect Incorporated.  We are here to support others in our profession as well as our allies and those who are seeking a career in law enforcement who happen to be gay, lesbian, or bisexual.