We have produced a one-hour radio show special about how LGBT law enforcement professionals are making themselves more visible within the ranks of law enforcement. Despite the prevailing homophobia, which continues to be pervasive throughout the profession, many gay and lesbian officers are tired of hiding and are coming out on the job. Some of these officers have found success while others have been fired simply for being who they are. Greg Miraglia, the host and producer of this show, talks with officers from around the country about their experience coming out. He also explores how law enforcement training is changing in order to make the work place more accepting of gay and lesbian officers.

“Outbeat Radio Comes Out From Behind The Badge” was produced exclusively for KRCB Radio of Santa Rosa and will air on Sunday, May 30, 2010 at 8PM PST. You are invited to attend a special preview and discussion about this show at 4PM on Saturday, May 15, 2010 at the A Different Light Bookstore, located at 489 Castro Street in San Francisco. This even will feature several of the officers interviewed in the show. Mr. Miraglia will also be signing copies of his book, “Coming Out From Behind The Badge.” A meet and greet will follow this event at Toad Hall. 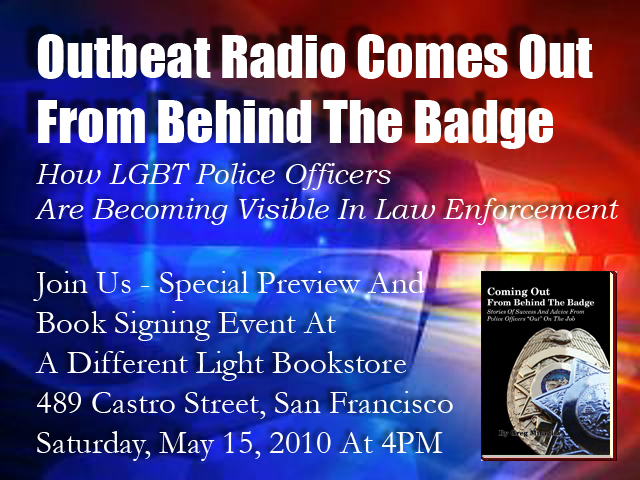