Historical Week With History In The Making 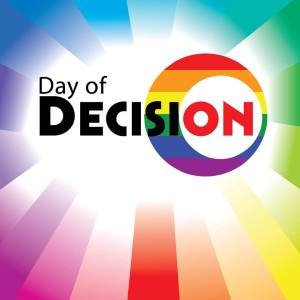 This morning I woke early to watch for news of the decisions about marriage equality from the United States Supreme Court.  Like the day before, I was disappointed that no decision was announced.  But at least the Court committed to sharing their decision about California’s Proposition 8 and the Federal Defense of Marriage Act tomorrow, on Wednesday, June 26, 2013, exactly ten years to the day that they announced their decision in Lawrence V. Texas sodomy case.  This was the landmark decision striking down state held sodomy laws that were used for decades to make same-sex sexual acts illegal.  While I have the same lack of ideas about how the Supreme Court will rule on marriage as everyone else, I don’t believe its any coincidence that waited until the anniversary of the Lawrence decision to share their decision on marriage equality.  In fact, the Supreme Court wasn’t scheduled to be in session tomorrow.  It was actually this Thursday that was to be the last day of court before summer recess, but Chief Justice Roberts scheduled a special session for tomorrow.

As for today, it too marked an historical anniversary for the rainbow flag.  35 years ago today, flag maker Gilbert Baker helped raise the rainbow flag he created for the very first time in San Francisco.  This flag quickly became an icon for the LGBT community and a symbol of our fight for equality.  It went on to be recognized internationally and continues to serve as our symbol of pride.  Gilbert hasn’t profited directly from the sale of any flag or from any of the millions of items and websites that flag now appears.  I’m grateful to Gilbert for his creativity and for giving us an aspect of our identity.

I found myself frustrated, anxious, and excited today.  I spent a lot of time thinking about my own experience watching history being made and considering it’s direct impact on me and my life.  In high school and college, I read, of course, about the civil rights movement and the struggles African Americans and other persons of color experienced.  And while I can identify with those struggles, they were not mine.  But this one is and I can’t help but feel like my “class” as a citizen is to be determined by the contents of these pending decisions.  I’m not trying to be dramatic here, but truly how the Court rules on the Defense of Marriage Act directly impacts me and my husband, who whom I am legally married as recognized by the State of California.  Tomorrow, the Court will decide whether or not my marriage is worthy of federal recognition and the 1138 rights I currently do not enjoy.  It’s a matter of being recognized as either a “first class” or “second class” citizen and that thought makes me anxious.

As for California’s Proposition 8, while the outcome of that case doesn’t directly impact me, it does impact people who I care about and who are close to me.  And in a more broad view, it will impact the equality of how my marriage is recognized in California.  Currently, it’s an exception to the rule.  For me, seeing Proposition 8 defeated will remove that exception and make me feel more like everyone else rather than an exception.  This may all sound a bit self-centered, but when it comes to civil rights, it is all about ones self.  These are matters that impact individuals and their lives and for the first time, I’m really feeling what it was like for racial minorities in the 1960’s and for other minority groups who have had their civil rights hanging in the hands of the Supreme Court.  It’s not a great feeling and explains for me my anxiety.

Whether you are married or not, gay or not, you should care deeply about the Supreme Court’s decisions to be released tomorrow.  This is a matter of if and how we provide equal rights for a broad group of citizens from both genders, every ethnicity, and every race present in our Country.  Both marriage cases have the potential of being recognized as landmark decisions. This is history in the making and I can’t wait to see what happens.