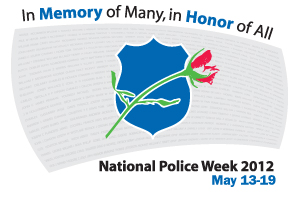 National Police Week is the time each year when we remember those in law enforcement who gave their lives in the performance of their duties – “the ultimate sacrifice.”  These heroes never entered the job with this intention and did willingly sacrifice themselves for the sake of protecting us all.  This is a week to remember them all so that we never forget.

Law enforcement officers die in the line of duty from many causes.  In California, vehicle related deaths are the most common.  But one of the causes of law enforcement officer death that we don’t talk about enough in suicide.  Like much of the rest of society, I think we are still too embarrassed to talk about this subject because somehow we don’t think that when someone takes their own life that it is as noble or worthy of recognition.  It’s tragic and the loss to family, friends, and our profession is the same.  In 2010, some 145 law enforcement officers committed suicide in the United States.  And these are the cases we know about.  The motivation of these officers can be often tough to figure out.  How many of these officers do you think were struggling with being gay?  Of course there can be many contributing factors that bring someone to the point of suicide, but how tragic is it when someone takes their own life because they fear being “found out” or rejected by a profession they love.

I know of one local story involving a young officer who had a very successful career.  He left one large agency and went to another, presumably to find personal happiness.  The larger agency had a well know reputation for being homophobic and not accepting of LGBT officers.  Apparently he did not find what he was looking for at his new department and decided that taking his own life was better than “coming out.”  The worst part is that no one wants to talk about it.  Despite the evidence found in his house, his parents denied it and the local agency just didn’t want to deal with it.

I’ve heard from so many closeted officers that suicide became an option for them at one point or another in their life before coming out.  And it was all driven by a fear of being rejected or forced out of the law enforcement “brotherhood.”  We talk such a good game about the importance of “having each others back” and the “thin blue line,” but when it comes to accepting the fact that one of our “brothers” or “sisters” is gay, the pervasive culture in many law enforcement agencies is still homophobic and not accepting of this aspect of our colleagues.  I hear all the time comments like, “well we don’t have any gay people in our department, so it’s not an issue here.”  The problem is that there are gay people in your department, you just don’t know who they are.  And we can’t simply expect people to “come out” and make themselves visible if the culture is not safe for them to do so.

This year, as we remember those who died in the line of duty and think about how and why, let’s also think about how we can prevent the tragic loss of a life from suicide.  How can we make sure our agencies really do “have each others back” and how can we create a safe environment for our LGBT colleagues to come out.  How can we create a culture that is supportive of our LGBT colleagues.  I could write for hours about the steps an agency can take to make a change in culture, but truly is starts with every individual member.  It simply requires an expression of acceptance and a commitment to no longer use hateful words and phrases that communicate homophobia.  I truly believe this is the last bastion of bigotry facing law enforcement internally and we have a great deal of work to do in this area.