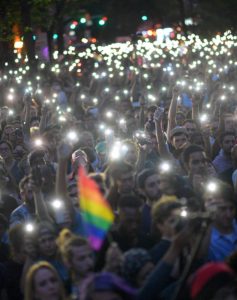 The weight and gravity of what happened at the Pulse bar in Orlando finally struck me down this afternoon on my way home from the college.  Since receiving the first text messages from friends early Sunday morning, I’ve committed myself to sharing information on the social network channels for my LGBT news radio program, supporting students and staff on campus, and trying to wrap my head around the magnitude of what happened.  I’ve listened with amazement to Anderson Cooper’s reports and interviews, looked at countless pictures of thousands of people all over the country at vigils and continue to wonder how members of LGBT law enforcement are coping with the work and their own personal connection to what happened.  The Orlando Police Chief said that this was the “darkest day” of his 25 year career.

As I sit reflecting on it all, a few thoughts come to mind.  First, there is so much hate out there in this country.  From the hate inspired murder of 49 of our brothers and sisters who were in the bar that night to the spewing hate speech coming from the mouths of cruel, inhuman, religious zealots and politicians across the United States.  Who are these people and where does the hate they preach and speak come from?  I’ve certainly heard a lot of it over the years, but for some reason, today, I feel it on a personal level.  I find myself feeling exhausted and so tired of the political grandstanding over guns, Islam, and people like me.  And it feels especially painful in this month of pride celebrations.  Between the threats hurled by conservative politicians and presidential hopefuls to reverse our gains in civil rights to the most outrageous acts of violence we just experienced, it just all feels overwhelming.

This week I’ve been both inspired by the empathy, care, and concern from my colleagues and disappointed by the silence and lack of sense in leaders who have yet to say a word.   I found myself a bit lost and in question of our future.  So I went on a long walk by myself and began to think about some of the heroes who came before me and who inspired me to do the work I do.  And I thought about what they would be saying about all of this.   Harvey Milk’s “Hope Speech” came to my mind almost immediately.  I think Harvey would have been heart broken especially by the loss of so many young people at that bar.  But he would have been the first in line to march and to encourage us all not to hide, but rather to make ourselves visible.  He would have wanted us all to be “out” as an inspiration to those young LGBT people who are even more scared to be themselves after what they saw happen in Orlando.   I thought about Matthew Shepard whose murder 18 years ago is still talked about regularly today and remembered as an attack on all LGBT people.  If he were alive today, Matt would have been 39 years old and I have to believe he would have been out there holding a candle at a vigil rather than in hiding from fear.  If you know my story, you know that Matt’s story and the words of his mother, Judy Shepard, are what inspired me to come out from hiding and to make myself visible despite the presence of hate that took Matt’s life.

Our community has been dealt a huge blow and we are all feeling the impact on some level.  The threats and the hate are very real, but we cannot retreat and we cannot afford to hide.  And just like we hear about how to deal with an active shooter, we must rise and fight back.  Just as those courageous men and women did at the Stonewall bar back on June 28, 1969, we must stand up and say, we aren’t going to take this anymore.  We must embrace and engage our allies, especially those who are standing by us this week, and help them to become allies for life.  We do this best by make ourselves visible and by sharing our stories.  We owe it to those men and women who fought for us in the 1960’s and before as well as to those 49 victims who died in the Pulse bar to combat the hate that took their lives.  None of us with a conscious can sit back and continue to watch as conservative religious bigots spew hate from the pulpit and do nothing.  And none of us can afford to be complacent and not vote for the people who represent our interests and who will protect our civil rights.

As we bury our brothers and sisters in the coming week, we must rise from the sorrow and in their names continue to fight for our rights, for the respect we deserve, and to overcome the hate that threatens us all.  That hate is rooted in many places including the hearts of a few of us who cannot, because of religious and social rejection, reconcile their own sexuality.  This internalized homophobia is a manifestation of one’s experience within our culture and influence of conservative hateful religious beliefs and hate spewing politicians.

Pride events are opportunities to honor our overcoming the hate of the past, but this year, the hate we’ve witnessed in the present.   We need to rise again to honor Orlando and to show the haters in this world that we are here and aren’t going anywhere.  I will be at the San Francisco Pride celebration and will continue working to do my part.  I invite you to join me.