As far as we have come, as visible as we think we are, there is an ugly truth that we cannot ignore: Homophobia is still pervasive in law enforcement.  It is true; we have “out” gay men and women serving as chiefs of police and in all ranks below.  LGBT recruits are coming out during the police academy, transgender men and women are coming out and being recognized by their agencies and society for their capabilities and talents.  Just this month, a trans-woman was named supervisor of the DC Metro Police LGBT Liaison Unit and San Quentin State Prison in California fielded its first trans-woman in the facility.  But the ugly truth is that homophobia continues to be pervasive within the law enforcement profession as evidenced by recent events at San Francisco PD and the UCLA’s Williams Institute study published just this month titled, “Discrimination and Harassment by Law Enforcement Officers in the LGBT Community.”

The San Francisco  Police Department has long been perceived as being one of the most diverse organizations in the country.  The department serves one of the most culturally diverse and politically challenging communities in the country.  I know from experience that they have been leaders in providing diversity training, in recruiting diverse candidates, and in promoting acceptance and inclusion.  And even in an organization like this, evidence of intolerance, bigotry and a perception of racism exists.  In this week’s news, the department announced the investigation of ten police officers who are accused of exchanging text messages with racist and homophobic language.  San Francisco PD’s Pride Alliance (the LGBT employees association) condemned the actions of these officers in a press release and demanded a full investigation.  An attorney for one of the officers said his client didn’t really mean what they said, but that they were “just blowing off steam.”

Shouldn’t officers be entitled to privacy in their communications with one another?  And what about an officer’s First Amendment Rights?  We wouldn’t be hearing about this story if it were private citizens involved, right?  In my mind, police officers are public officials who are empowered with the responsibility and authority to protect the Constitutional Rights of all.  This responsibility includes providing due process and equal protection of all people in accordance with the 14th Amendment.  No, they don’t have a right to use or utter racial or homophobic slurs, even when “blowing off steam.”

The conversation today about racism and bigotry within law enforcement in this country is lively.  I do sincerely believe that the line and share of law enforcement professionals working the street are hardworking people with a good heart.  Unfortunately, the actions of a few end up casting a dark shadow on the many and we don’t seem to be able to rid our profession of these unprofessional and unworthy members.  What I find most disturbing is that stories like the one above are not isolated and that, despite how far the rest of society has come in its acceptance and understanding of LGBT people, law enforcement continues to be way behind. 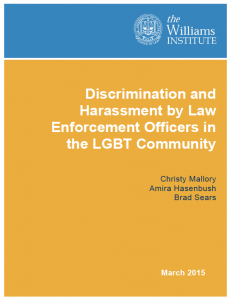 “Discrimination and harassment by law enforcement based on sexual orientation and gender identity is an ongoing and pervasive problem in LGBT communities.  Such discrimination impedes effective policing in these communities by breaking down trust, inhibiting communication and preventing officers from effectively protecting and serving the communities they police.  While a patchwork of state, local, and federal laws provides some protection against certain forms of discrimination, there is no nationwide federal statute that comprehensively and consistently prohibits discrimination based on actual or perceived sexual orientation and gender identity.

…Data from a wide range of sources show that such harassment and discrimination is greatest for LGBT people of color, transgender person and youth.” – UCLA Williams Institute, March 2015

Like the report on homophobia within law enforcement published two years ago, this one is just as damning.  Both demonstrate that homophobia is a pervasive problem, but this one goes a step further in linking race as an associated problem.  The data suggests that racism and homophobia are connected and so I don’t believe we can talk about one problem without including the other.

San Francisco Police Chief, Greg Suhr, responded to the allegations against his officers with an appropriately strong statement that included a commitment to fire the offenders if the allegations prove true.  And while this kind of administrative leadership and commitment is important, the damage to community trust has already been done.  That damage extends well beyond the borders of San Francisco just as does the damage done from incidents in Ferguson, New York, and every other place where racism is at least perceived to be.

The question now is what is to be done?  As stated already, the fall-out is a loss of trust between the police and the citizens they are paid to protect.  Trust is something that can be compromised with one action, in just seconds, or with one text message.  But, trust takes years to rebuild and reclaim; just ask LAPD following the traffic stop in 1991 with Rodney King.  The UCLA study suggests that a federal non-discrimination law that includes sexual orientation and gender identity is one way to combat homophobia, but from my experience, laws and policies are really only useful for punishing offenders after the damage has been done.  These laws are important, but they don’t make people whole after being victimized.

The Williams Institute identified training as being one of the recommendations for remedying this problem.  They also recommend departments reach out to LGBT communities and establish liaisons with this community.  In my mind, these are the two most effective ways to change hearts and minds and to build relationships between police and the citizens they serve.  Training on differences such as race, sexual orientation, and gender identity need to be on-going and part of the “perishable skills” inventory of training.  Cultural diversity training has never been viewed with the same value as officer safety and tactics, but it should.  How an officer relates to others who are different is at the heart of this issue and, in my mind, there is a very close correlation between relating effectively and preserving safety.

Homophobia and racism are very much the same thing and originate from ignorance and fear.  The prescription for dealing with homophobia in law enforcement remains the same and includes a heavy does of education and awareness.  As LGBT members of law enforcement, we can take an active role in helping our profession evolve by being “out” and by sharing our stories.

We need to evolve the hearts and minds of every law enforcement professional so that, even when “blowing off steam,” the utterance of a racial slur or homophobic term never even comes to mind.  We need to train, constantly, our officers how to maintain a clear and conscious awareness of the individual biases we all have.  When we know our biases, we will always be in a better place to monitor how those biases impact how we see others and how they impact our decision-making with those we come into contact with.  This is critical, because the decisions law enforcement officers make every day involve our civil rights and the protection of those rights – a responsibility that is at the core of every law enforcement officer’s job.