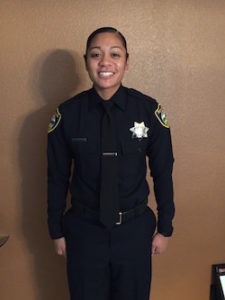 Meet Jameiz Terrell.  Ms. Terrell is now a police officer with the Richmond, California, Police Department.  She graduated from the California POST Basic Police Academy at the Napa Valley Criminal Justice Training Center.  She was elected by her peers to the position of class president and was a very successful leader and role model in her class.
“I was born and raised in Vallejo, CA. I attended Catholic School from Pre- School until the 12th grade. I started playing  basketball at the age of 7 and believe the game has molded me into the person I am today.  I graduated from St. Patrick- St. Vincent high school in 2008 and was the point guard for the first basketball team in Vallejo to win a State Championship. I earned a college scholarship to CSULA and played there for 2 years. I transferred to CSU Stanislaus and finished my college basketball career. I graduated in 2012 with a B.A. in Criminal Justice and went on to obtain my Master’s degree. While obtaining my Master’s, I was one of the assistant coaches for the women’s basketball program. I graduated the summer of 2014 with a M.A. in Educational Counseling.
In April of 2014, I started my law enforcement career as a Juvenile Correctional Officer in the Contra Costa County Juvenile hall.
I would like to thank my family for always supporting me. My fellow cadets for consistently making sure I was focused. Lastly, the academy staff for believing in me and pushing me to be a better person.” – Jameiz Terrell 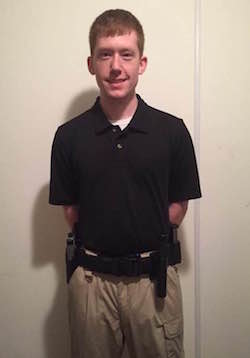 Meet Zachary Johnson.  Zackary Scott Johnson is the son of Scott and Dena Johnson of Ravenswood, West Virginia. He is a 2011 graduate of Ravenswood High School.  Prior to his enrollment at Buckeye Hills Career Center in Rio Grande, Ohio as a member of the Peace Officer Training Program, Zack attended West Virginia University at Parkersburg as a Criminal Justice major.  During his time at WVU, Zack was a Dean’s List student who both excelled at his studies across the board and clearly demonstrated a passion for his chosen career field.
“I am attending the Peace Officer Training Program at Buckeye Hills and working full time as an administrative assistant at Star Plastics, Inc. in Millwood, West Virginia.  Upon graduation from the academy in the Spring of 2016, I hope to serve the public as a peace officer in either Ohio or my home state of West Virginia.” – Zackary Johnson