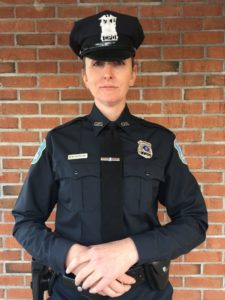 From a young age Mackenzie Valentine was interested in law enforcement.  In high school she was a law enforcement explorer scout.  After high school she served five years in the United States Army Military Police Corps where she was a road patrol and dispatcher.  Upon leaving the military, Mackenzie began pursuing her career in civilian law enforcement by taking civil service tests for various police departments.  After many attempts and false starts she landed her dream job with the Albany, New York Police Department.  Roughly a month into the police academy she fell off an obstacle during an obstacle course breaking her heel bone.  Despite that she completed the entirety of the obstacle course.  After being misdiagnosed by the city doctor she continued to endure training with the broken foot and never failed a physical fitness evaluation.  The injury began affecting every aspect of the academy which made it clear that she was going to have to resign the academy.  Mackenzie hit the physical therapy with great motivation and recovered.  She then enrolled herself in the Ulster County Law Enforcement Training Group which accepted self-sponsored recruits while using her Post 9/11 GI Bill education benefits.  During the academy, Mackenzie was picked up and sponsored by The Chatham Police Department in Chatham, New York.  On December 20, 2017, Mackenzie graduated with her academy class of nineteen.  She served as the Platoon Treasurer and won first runner up in physical training.  As a transgender woman, Mackenzie hopes to continue educating law enforcement and to be a bridge between the law enforcement and LGBT community.