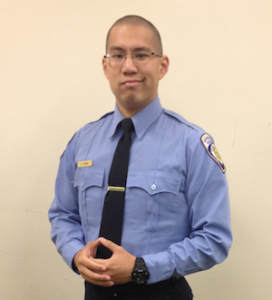 Ryan Wang – I’ve always been interested in the law enforcement field. Even as a kid, I loved mystery novels, detective movies, and crime drama. I love the crime solving and logical aspect of police work. I want to be the detective in the books and movies matching wits with a criminal. However, growing up in a traditional Chinese family in a conservative suburban town led me to believe that a gay man can never be a police officer. So I went to college with plans to be a teacher. While studying math at UC Berkeley, I started working at UC Berkeley Police Department as a community service officer. Working in a police department rekindled my passion of becoming a police officer. Living in a much more liberal area gave me hope that I could be one.
I started at Napa Valley Police Academy in January of 2014. At that point, I was still mostly in the closet. A few of my close friends knew, but that was it. At the police academy, I’ve come to learn to trust others. With all the emphasis on trust and integrity in the academy, I decided to come out to my class on March 7, 2014. And it was one of the best decisions that I’ve made. I’ve never felt more accepted and supported by a group of people, both students and staff. No one treated me any different. In fact, it was never really an issue. My sexuality was treated as just another fact about me.
One event that really helped me come out to my class was a field trip we took to the Castro in San Francisco. I heard life stories from a panel of out gay police officers. They really inspired me to realize how much more accepted homosexuality is in the law enforcement world. They are the primary driving force that led me to come out to my class. Once I graduate, I would love to be on that panel. I want to do for future aspiring police cadets what these brave officers did for me. I think I’d be happy if I can help even just one person do what I did.