April 9, 2016 (Boston, MA) The New England Gay Officers Action League honored Greg Miraglia at their 25th Anniversary celebration this weekend in Boston, Massachusetts. At the celebration dinner, New England G.O.A.L. President Anthony Imperioso presented Greg Miraglia with the Henry Dumas Memorial Award for his work writing “Coming Out From Behind The Badge” and “American Heroes Coming Out From Behind The Badge.”

Miraglia told the 300 members in the audience, “I’m deeply honored and humbled to be recognized at the 25th anniversary celebration of such an important organization.  New England G.O.A.L. has been around twice as long as I’ve been ‘out.’  If such an organization existed in California when I was younger, I might have been able to come out a lot sooner.”  He added, “G.O.A.L. provides critical education and awareness that makes law enforcement a better profession by improving its understanding of the LGBT community.”

Greg Miraglia is an author and the founder of “Out To Protect,” the nation’s only scholarship program supporting LGBT law enforcement students. Out To Protect is a non-profit organization funded entirely by the proceeds earned from Miraglia’s books and private donations. 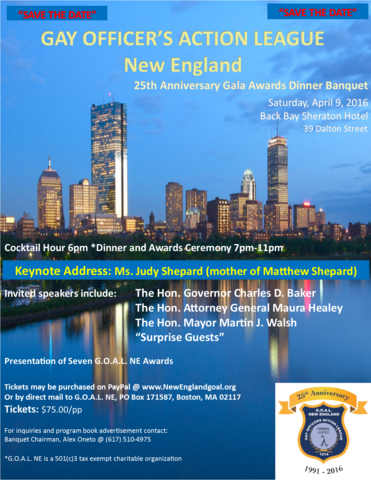