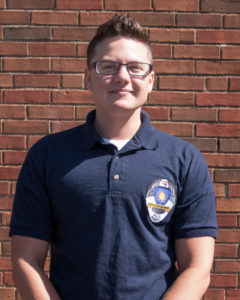 Conner Callahan is 27 years old and just graduated from the Kent State Police Academy and is looking forward to working for one of the larger cities in Ohio, such as Akron or Cleveland. “By working in such a big city, I hope to serve a diverse community. I would also like to work different PRIDE events, to show people that there is an intersection between the LGBTQ community and the police community. Crisis Intervention is also important to me, and I hope to use those skills as an officer as well. I feel that, because of my life experiences, I would be excellent at helping people in crisis.”
Conner identifies as both gay and as a transgender man.  “Being both gay and trans comes with a unique set of difficulties.  Many people in the gay community, especially the dating community, don’t want me there, or don’t think I belong. I have faced a great deal of discrimination both from the cis and heterosexual communities, as well as the LGBTQ community.”
I would like to thank the director of my program for working with me on a number of things that were new to him, my fellow cadets for their support, and my instructors who believed in me and pushed me harder than I thought possible. The Kent State Police Academy is a well-known and respected training program. It consists of over 600 total hours of training over a four-month span. “During my training, a number of topics were discussed, including patrol techniques, human resources, driving, firearms, CPR / AED, and homeland security. We studied the Ohio Revised Code, dealing with traffic crashes, gang awareness, and how to document a crime scene. We were also tested on a number of things including our driving skills, handgun and shotgun proficiency, building search techniques, first aid and CPR, sobriety testing, and the use of both LiDAR and RADAR. My training will be complete in June when I take the state exam, and I will then be OPOTA certified and qualified for a job as a peace officer.”
“During one of the first days of class, one of the instructors was telling us about some of the more gritty realities of being a police officer. One point he really drove home was the fact that, as an officer, we were giving up a lot of things, namely holidays. He talked about how it’s hard to patrol on Christmas while everyone else is home with their families, eating and giving presents. But then he said that, personally, it was something he’d actually grown to enjoy. He liked being out there, protecting the community so others could have the security of a day with their families. That point really resonated with me. I am no longer close to most of my family, and between the divorce and coming out, I’ve lost a number of friends as well. I don’t know if I’ll ever trust someone enough to fall in love, much less get married again, and it’s not physically possible for me to have children, nor do I really want any. But I like the idea of it just being me out there, protecting the city and serving my community. I’ll take the long nights, the dangerous streets and the drug addicts, if that means someone else doesn’t have to.”