An Interview With Jamey Frank 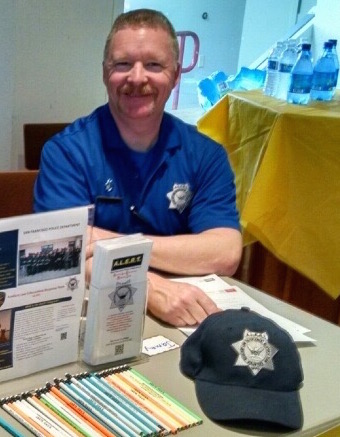 Briefly describe yourself including age, law enforcement, fire, and or EMS experience, what part of the country you are from and anything else you feel is important to know about you.

I’m a 51 year old man who has lived in San Francisco for 26 years, originally from Milwaukee.  I got a certificate in Administration of Justice at San Francisco City College, and a Reserve Level II certification at College of San Mateo.  Throughout, I’ve volunteered with SF SAFE neighborhood watch, Castro Community on Patrol, worked as a civilian role player for the SFPD academy classes, and now volunteer with SFPD for disaster preparedness through A.L.E.R.T, the Auxiliary Law Enforcement Response Team.

How did you become interested in law enforcement, firefighting, or the EMS profession?

My first partner while in college, Jim, was a former Deputy Sheriff Sergeant with Santa Barbara County.  He loved the job, and rose to command staff as the youngest sergeant ever.  However, Jim had to leave his job due to constant stress of being gay and closeted, and being found out and harassed by his fellow deputies.

When did you discover you were gay, lesbian, or bi-sexual and what did you think about relative to your interest in law enforcement, firefighting or EMS?

In my late teens while in Milwaukee, I finally realized that I was just going through the motions of dating women, and they were never more than good friends.   But it was not until college in Santa Barbara that I finally came out at a Gay and Lesbian Student Union meeting.

My first boyfriend I met at a “No on 64” meeting – the 1986 “Laroush Initiative” proposition to criminalize HIV+ persons and contain them in concentration camps.  Jim and I became friends and began dating.  He disclosed to be that he’d had to leave his job as deputy sheriff due to harassment and constant stress.  I’d always been intrigued by law enforcement, but his experience was a huge deterrent to considering it as a profession.

Describe your experience getting hired and going through your training academy.  Were you out?  Did you come out during the academy?

In 2008, when I attended Reserve Police training at College of San Mateo, most of my classmates were blue collar types in construction or similar jobs.  I didn’t officially come out to them, but I think they figured me out as I looked different, lived in San Francisco, and was not particularly physically coordinated.  However, none of they at any time made any derogatory comments or treated me strangely; I was actually surprised.  In fact, when a retired police instructor made a homophobic comment about having to go on the home of “homosexuals” and making sure to “put on gloves” so he didn’t “catch anything” they were noticeably upset; I shrugged it off.  Afterwards, they came up to me stating, “Dude you have a great attitude.  We can’t BELIEVE what they said in there.”  I told them I’d expected it, but having heard derogatory comments for years, I didn’t take the bait.
Another old-school retired cop teaching firearms, made comments about certain people “not having the personality needed to be a cop,” and nodded in my direction.

What was it like starting off in your department?  Did you come out?  If not, what kept you, or is currently keeping you from coming out at work?

As a volunteer with SFPD, I never make point of coming out, but I don’t hide any information if it comes up.  SFPD has many out officers, mostly women, and two of them were my role models, Rose and Sherry.  As an ALERT volunteer, three of our five training committee members are out gay and lesbian.

However, as I applied throughout the Bay Area, the moment departments found out I was gay, somehow there’d be an excuse not to hire me for reasons I’ve never been told.  Even SFPD took so long in the Reserve hiring process, my 3 year certification lapsed.  I practiced to recertify at the South Bay Academy, but when I went through testing the proctor was unprofessionally rude and tested me on skills I hadn’t learned, although I did my very best  They claimed I didn’t pass, yet sent me a certificate months later with no explanation.

Describe your most difficult situation being gay in your public safety profession.

In big cities, it’s not an issue.  In smaller areas and suburbs, it feels like Mayberry, and the old school doesn’t appreciate diversity.  Being openly gay could be a liability there.
As an older gay man, I’m not the demographic most departments are looking for.
Still, I’m committed to public safety, and appreciate LEO’s, which is the reason I continue to volunteer regularly.

What specific event or general experience surprised you most about being gay in your profession.

Coming out in college was the most profound experience ever for me; it was truly life changing.  That is when I found my confidence, my voice, and courage to be what I needed to be.  I had two lesbian professors at UCSB who were incredible inspiring and forced me to think differently about the world and people in general.

What, if anything, would you have done differently relative to being gay in your profession?

Had I known that law enforcement could have been a possibility when I was younger, I might’ve pursued it at that time.  It was not until my mid 40s that I thought this could be an option, but by then I was past then age that most agencies would consider.

One of the important goals of this book is to help fellow gay law enforcement officers, firefighters, and EMS professionals and their allies.  What advice can you provide to the following people?

Research the specific agencies where you are interested in working.  Try to find out LGBT members and talk to them about their experiences.  Do not apply or work for any agency that forces you to lie in any way, which is both personally damaging and the complete opposite of what is expected of a LEO.

A gay teenager who is thinking about the best way to get into your public safety profession.

Join a larger agency that appreciates diversity, as a Cadet or Explorer.  Be “out” all the time, but no need to make an issue of it.  It should be like having a certain color eyes, not anything strange.

A fellow public safety professional who is gay, but not out to anyone at work.

You need to get comfortable with yourself; explore your gay persona, discuss with friends, maybe even trusted colleagues.  Know your rights should there be any sort of back lash.  If your command staff is homophobic, look for another agency.

When you are ready, no need to make big statements, but you can tell individuals one at a time about yourself, as part of sharing something personal.  Most people will be flattered and interested, and hopefully will become a closer friend as a result.

An agency executive or manager who is an ally and wants to support gay public safety professionals.

No degree of homophobia can be allowed.  That being said, harmless banter said outside of work should never be grounds for reprimand.  If someone gets offended, have both parties meet, discuss their feelings, and apologize.  Never let feelings of anger, prejudice, or resentment fester for any length of time.

What else would you like to say that you feel is most important for readers to know about you or your ideas?

I’m a dedicated volunteer who supports law enforcement.  Yet, I feel that because of the “rule of the list” I haven’t been able to move forward in the profession.  Simply ticking demographic boxes shouldn’t be the main criteria for hiring.  Too many agencies do not in any way consider the individual, the background, the contributions, and their motivation to become a LEO, and instead look for mass hiring practices.

I’m still interested in becoming a Reserve Officer somewhere in the Bay Area or northern California.  But I hesitate to commit more money and time without a reciprocal commitment.  If any agency were to reach out to me, I’d certainly want to pursue working for them as a civilian or as a sworn Reserve.

Is there anything else you would like to add?

Volunteering with law enforcement agencies is a huge amount of fun!  Whether it be scoring a Motor Officer Rodeo, working as an Academy role player, a disaster preparedness volunteer…do anything you can to participate in any of these fun activities. You’ll meet dedicated professionals who are highly intelligent, motivated, street smart…and have great senses of humor, too!