The recent action taken by Trump to ban transgender people from the United States Military harkens of President Eisenhower’s infamous Executive Order 10450, issued in 1953, banning non-heterosexuals from serving in the United States government and labeling them “perverts.”  Is this the next step?  A role back of the repeal of “Don’t Ask, Don’t Tell” or will he go even further?”  Perhaps even more disrespectful than the action itself was the fact that Trump issued this order via Twitter without so much as one bit of consideration for the dedicated citizens under “his command.”

Executive Order 10450 was based in fear created largely by Senator Joe McCarthy who, after not being able to find enough communist in the government, had to find another source to fear.  This presidential order lead to a witch-hunt that spread far beyond the federal government and it stigmatized the entire gay community.  We are far beyond that today, but Trump seeks to create the same kind of witch-hunt in order to appease conservatives who refuse to become educated and informed about gender identity issues.  But no matter the reason for the fear, the action taken by Trump is aggressively discriminatory.  UCLA’s William’s Institute estimates there are already 15,500 transgender people in the military.  This order doesn’t just prevent further recruitment, it puts in jeopardy the livelihood and rights of existing members. 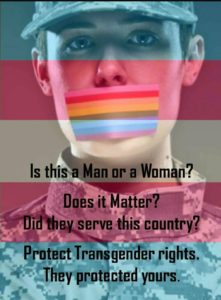 We condemn this action and see it as directly and overtly hostile to the rights of U.S. citizens who happen to be transgender.  It’s a step toward threatening non-heterosexual identities and it must be stopped.  We fully support OutServe’s position and intent to fight this order using the United States Constitution and the 14th Amendment to suppress this discriminatory action.

“The President’s order to remove transgender service members from the United States armed forces is nothing less than a purge. He is implementing this purge based on bigotry, motivated by agents of an ideology that has no concern for the national defense, and in blatant disregard of the experience of career officers who spent more than a year developing and implementing the current policy.

It is inconceivable that a man with a demonstrated incompetence in managing the small staff of the White House should have any credibility when it comes to making sound personnel decisions that will effect a fighting force of more than 1.8 million men and women.

We recognize this purge for what it is – a discriminatory attack on the people who have volunteered their lives for the defense of the country. It is arbitrary and capricious, a callous and questionable exercise of constitutional authority which is beneath the dignity of a Commander-in-Chief.

We condemn the actions of the White House in initiating this purge. We condemn the disregard that the President has shown to transgender men and women who wear the uniform. We condemn the intent of any person who would make it the mission of United States military to discriminate against the very citizens they are charged to defend. And we condemn the indifference of any elected official who does not now stand up for both military personnel and the LGBT community by opposing this purge.

OutServe-SLDN with our partner Lambda Legal will be immediately filing a lawsuit in federal court to challenge this action.

To all of the police chiefs and sheriffs who have already taken a stand and made a public statement to their officers and the community welcoming and supporting transgender members of law enforcement – thank you.  Your words and support are critical and appreciated.

We encourage every chief of police and sheriff to speak out and communicate to the rank and file and to their respective communities that the discriminatory actions of a President do not represent the opinions and actions of your department and local community.