Deputy Anthony Kasper wrote a letter of encouragement featured in our new book that offers support especially for LGBT youth.  He is a pioneer of sorts being the first openly gay deputy sheriff hired by the department he now works for here in California. 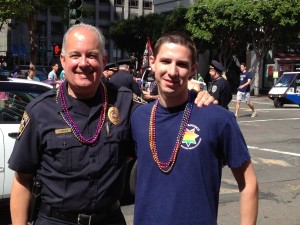 “Before January 20, 2012, I would have never thought I would be serving as openly gay deputy sheriff.  I can truly say my life changed forever thanks to the great work Greg Miraglia has done with inspiring the men and woman in law enforcement on being openly LGBTQ.

I grew up in a very conservative county. As a young police cadet, who was also a closeted gay man, I quickly learned about and experienced the homophobia in law enforcement.  The openly derrogatory remarks made by my police mentors lead me to believe that I was going to be the only gay police officer in law enforcement.

The first time I met Greg Miraglia was when I joined the police academy in 2012. Greg was one of my Academy instructors.  By being openly gay, Greg gave me the courage to come out. In just a short three years time, not only was I hired as the first openly gay Deputy Sheriff in my county, I also married the love of my life. It truly gets better and it starts with the great work Greg teaches and this great book.”

Click Here To Order Your Copy Of Our New Book.