Greg Miraglia Posted on November 10, 2015 Posted in Announcements Tagged with coming out advice, coming out from behind the badge, Irvine Police, John Sanders, LGBT law enforcement 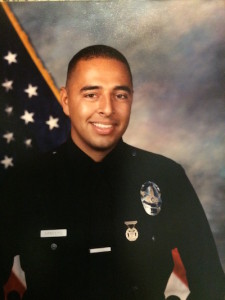 “I grew up in Baldwin Park California in a hard-working middle-class family. I graduated from Baldwin Park High School, and furthered my education at Mount San Antonio College. While attending college I took a position as an EMT for Crippen/AMR ambulance as it worked well with college schedule. At the time I had aspirations to be a physician assistant, but I didn’t feel challenged as an EMT and went on to Daniel Freeman Paramedic School. After working as a Paramedic for several years I re-enrolled at Cal State Los Angeles where I majored in Biology. While in college, there was a huge push to hire police officers and I was approached by several agencies while working as a Paramedic. I ended up applying for many of them, more out of the need for money than my desire to be a police officer. At the time I was not out and never talked about my feelings to anyone. I eventually was hired by several agencies at the same time, but took the offer from Los Angeles Police Department. After being hired I graduated with the rest of the Los Angeles Police Department class 1-96.  I worked patrol in Rampart, South West and Hollenbeck Divisions. I also worked as a gang officer (formerly CRASH) in Hollenbeck. After working at Los Angeles Police Department for four years, I became fearful that others may know my secret. I feared being fired over it and left along with many others during a period of mass exodus over unhappiness with the working conditions.

I left LAPD for a position at the Irvine Police Department in Orange County California. This agency had a reputation of hiring only the best officers and they paid very well. Since I have been at the Irvine Police Department I have worked as a patrol officer, K-9 Officer, Field Training Officer (FTO), and a Detective. One of the most notable cases I have been involved in while at Irvine without a doubt was the “Dorner” investigation. I responded to this crime scene and wrote the original search warrants. His crime spree started in Irvine and ended in Big Bear, California. Several funerals later it was all over.

While I was at Irvine I came out to my wife after she told me she wanted a divorce. I cannot say that it was the happiest times of my life, but I found the critical and crucial support I needed through other gay officers I met online. Today many of them are my closest friends. At the time I really felt as if I was the only gay officer out there and had a chip on my shoulder that I would face retaliation or hatred in the work place. Those fears and demons were all in my head. I created my own fears. What I have found is that if you’re a good officer and have the respect of your peers then who you love really doesn’t matter. I have gained more respect from my peers for being honest. Like I tell everyone. I’m not a gay cop. I’m a cop that happens to be gay. I currently serve as the LGBTQ liaison for the Irvine Police Department.

Currently I live in Orange County with my husband Cesar, and two biological children from my first marriage. It is not without his love and support through all the hardships of life and loss of loved ones that I would not be where I am at today. Love you dearly Cesar for all your love and support.”

Click Here To Order Your Copy Of “Coming Out From Behind The Badge.”