Wearing A Ring With Pride 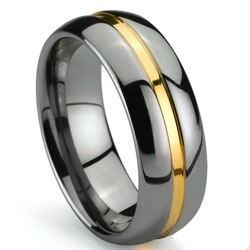 June 26, 2013 turned out to be the historic day I anticipated it would be.   I was up early to follow the Supreme Court session as the decisions about the Federal Defense of Marriage Act and California’s Proposition 8 were released.  All of the frustration and anxiety I felt the day before quickly transformed into elation and excitement as two clearly discriminatory laws were struck down by the Supreme Court in two landmark decisions.

I imagined what it must have been like for people of color, women, and other minority groups on the day similar decisions were read or when laws like the Civil Rights Act of 1964 were signed.  For the first time, I felt a shift and some-how more equal, more of a full citizen, and much less of a less-than.  I’ve always been proud of my marriage and of who I am married too.  I chose to wear a ring because it reminds me every day of who I love and of the commitment I made to him.   But that ring also serves as a visible aspect of my identity and it now can be recognized fully and more equally.  Today, I feel just a little more pride in being able to participate fully in the institution of marriage and all that is represents.  And I’m proud to make that participation visible to the world.

In many ways, this marriage equality battle is very much representative of what equality means for LGBT people.  But let’s not forget that we have won the war just yet.  Assuming the 9th Circuit Court of Appeals lifts their stay on the injunction against enforcement or Proposition 8, there will be only 13 states in which marriage equality is available.  Yes, for those legally married in one of those states, we now have full recognition of our marriage by the federal government, but marriage equality needs to be available in all 50 states.  Perhaps the civil right that is even more significant and more broadly applicable to more LGBT people is federal employment protection.  While we celebrate the landmark victories we achieved this week, we need to be careful not to forget all that we still have to fight for.

Even more important, we need to remember that laws and court decisions do not change minds and hearts.  We need to wear our wedding rings with pride, share our stories, and continue to make ourselves visible in this country so that the majority will learn that this minority is more like them than not, that we are not a threat, and that we are entitled to the same civil rights as everyone else.  This is my mantra and I hope that you will join me by sharing all of who you were created to be with your family, your friends, and your colleagues at work.  We are living in a vastly different space of equality today, but we only got to this point because those before us took great risk and showed the world who they are.  It’s time for everyone still in the closet to join the rest of us who are out so we can continue making progress toward achieving full inclusion and equality.