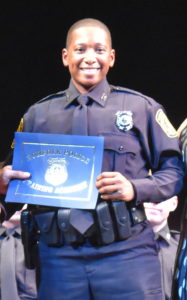 Jessica Mayes graduated from the Police Academy in Norfolk, Virginia on July 17, 2019.  She is a graduate of Old Dominion University with a Bachelor of Science in Criminal Justice and a minor in Psychology.

“At first, I did not know exactly what I wanted to do so I explored my options. It wasn’t until I did a ride-a-long with a local police department that I realized I wanted to become a police officer. I tried to get into the department, and I was disqualified. I was hurt, lost, and did not know what I was going to do. I worked retail and food for a few years and then I had a life changing moment.

In August 2017, I was hit by a drunk driver in the middle of the afternoon on a Sunday. When I got out my vehicle and the man approached me, I could tell right away he was drunk. When the police officer arrived on scene, he wasn’t too happy to be dealing with an accident on a hot day. He was about to let the gentleman leave when I told him that I thought he was drunk. He went back over to the man and sure enough he was drunk. It also wasn’t his first DUI. After that, I knew I was meant to be a police officer so I tried again and got disqualified again.

I ran into an officer who worked for the Norfolk Police Department and he spoke very highly of his department. So I gave them a call. I am proud to say that I will be a Police Officer for the Norfolk Police Department in July 2019. I am looking forward to getting involved with my community and helping people on their worst days. It is exciting to work for a department that has my back as an LGBTQ woman and a city that has programs and events for individuals like me.”